St. Patrick’s Day may have originated in Ireland, but Americans have certainly adopted (and adapted) the holiday into a celebration of everything green. San Diego and San Francisco both host fun events to celebrate the holiday, and the following is a list of some of the more popular parades, parties, and public events.

We hope that all of our students have a fun and safe St. Patrick’s Day! Don’t forget: you must wear something green, or you will get pinched! 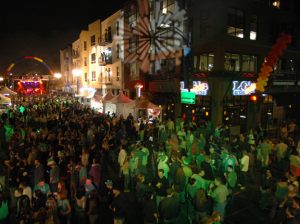 This event, which hosted over 20,000 party-goers last year, is one of the biggest Irish celebrations on the West Coast. 2012 marks ShamROCK’s 17th anniversary and is guaranteed to be a good time for anyone who loves live music and dancing. The event will be held from 2pm until Midnight and is only for ages 21 and over. Purchase tickets and learn more about the event here.

The St. Patrick’s Day 10K Run and 2 & 4 Mile Run/Walk in Mission Bay Park is more than just a chance to exercise: it is also a chance to show off your Irish-themed running costume! The event begins on Saturday March 17th, 2012 at 7:45am. Domino’s Pizza & beer will be served, and a special award for the “Best Irish Theme” running costume will be given. The race benefits the Rady Children’s Hospital San Diego. Learn more about this fun event here.

Be part of something BIG! Knowing that the bar scene in San Diego is one of the best, the producers of the World’s Largest Pub Crawl are looking to recreate history this coming year with their Luck of the Irish San Diego pub crawl. This event is only for adults ages 21 and over. Learn more information here.

Many bars in San Diego will serve green beer and have live bands, but none of the bars is as popular on St. Patrick’s Day as Hooley’s. Each year, the bar hosts “Hooleyfest San Diego” at the Rancho San Diego location. The event features live bands, a beer garden, and traditional Irish food; in addition, Hooley’s offers shuttles to and from the festival and a free ride home to those who live within a five mile radius of either location. Admission is $15 in advance, $20 on the day of the event and $30 VIP. Learn more here.

On  Saturday, March 17th, 2012 from 10am – 5pm, the 161st Annual San Francisco St. Patrick’s Day Parade & Festival will take place in the Civic Center Plaza. The Parade is set to begin at 11:30am at the corner of Market and Second Streets. Over one hundred colorful floats, Irish dance troupes and marching bands will begin their trek to the Civic Center Plaza.

In recent years the St. Patrick’s Day Parade & Festival has grown to attract an estimated 100,000 people. Admission is free, and the streets are guaranteed to be packed! For more information, visit the even’ts PR page: www.sresproductions.com/sfstpatricksday.html

On Friday night from 5-11pm, Taverna Aventine will shut down Hotalling Alley for DJs, food trucks and alcohol. The event–now in its sixth year–is known by San Franciscans as the most highly anticipated block party in SF. Note: the event is for those ages 21 and over only. For more information, visit Taverna Aventine.

On Thursday evening at 6pm, the California Academy of Sciences will dedicate its Thursday evening exhibit, NightLife, to Irish-themed arts. Attractions include an Irish step dancing performance, an exhibit about four-leaf clovers, Irish beers and whiskey cocktails at the museum bar, and a talk with the eco-friendly organization SF Environment about their definition of what it means to be green. Admission is $12. For more information, visit the California Academy of Sciences.

Would you like a glimpse into the life of Irish immigrants a century ago? On March 19, The Phoenix Theater will host a reading of John Patrick Shanley’s “Beggars in the House of Plenty.” The drama portrays the struggles of an immigrant Irish family living in New York’s Bronx neighborhood. Tickets are priced from $5-10 and the show begins at 8 pm. For more information, visit  The Phoenix Theater.