The history of the ABCs 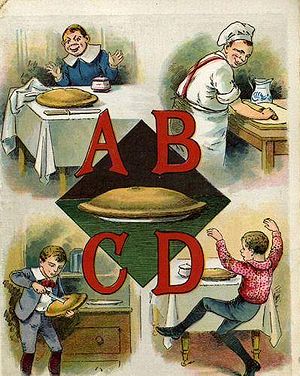 How did you learn the ABCs? The classic song–sung to the same tune as “Twinkle, Twinkle, Little Star”–is how most of us learn the English alphabet. But did you know that this was not always the most common way of learning the ABCs? In the 19th century, most students learned the alphabet with a rhyme titled “The Tragic Death of A, Apple Pie, Who Was Cut in Pieces, and Eaten by Twenty-Six Gentlemen, With Whom All Little People Ought To Be Very Well Acquainted.” Phew! That is a long name for a poem that is for simply memorizing the ABCs!

Here is how the original poem goes:

A was an Apple pie,

F fought for it,

L longed for it,

M mourned for it,

N nodded at it,

P peeped in it,

As you can see, there are quite a few verbs in this poem that make for a great vocabulary lesson! Let’s take a look at a few:

Did you notice that some things are missing? The letters “I” and “U” are not mentioned in this poem! That is because at the time the poem was written, the capital letters I and J were not defined as separate: writers could use either letter, and they had nearly the same meaning. The same situation occurred with U and V.

Who knew that something as simple as the alphabet could have such an interesting history? We are thankful that the old ABCs poem gives us some great vocabulary words, and after reading it and its surprisingly long title, we are also thankful for today’s simple song that makes learning the English letters so easy!