If there is one thing San Diego does not lack, it is beaches. The city has over 70 miles of beaches for students who study English in San Diego to enjoy, and with such temperate weather, these beaches can be enjoyed year-round! But with so many beaches to choose from, how do you pick where to spend your afternoons and weekends? Locals will tell you that each beach in San Diego has its own “personality” and that you should choose your beach based on the atmosphere you desire for that day. The following is a breakdown of the personalities of San Diego’s beaches to help our CISL students choose “fun in the sun” at a location that best suits their interests.

Perhaps the most popular beaches for young people, Pacific and Mission Beaches join together to create three miles of sand and fun. Along the beaches is a boardwalk for joggers, walkers, skateboarders, and roller-bladers to enjoy.

Before alcohol was banned on San Diego’s beaches, Pacific and Mission Beaches were known as the “party” places. Today, the communities are still home to many students, and there are plenty of beach bars to enjoy. Although the “vibe” is much more calm than it was several years ago, (there are many more families and children on the beaches now than there were in the past), we still rank PB and Mission Beach as the best beaches to go for partying, meeting young people, and shopping.

Pacific Beach is the northern part of the sandy strip. The beach is lined with restaurants, shops, and bars, making it easy to grab some food or do some shopping in between suntans. We suggest the lobster tacos at World Famous (the restaurant is located right on the beach) and a sunset drink at Lahaina Beach Bar.

South of Pacific Beach Drive is Mission Beach. Mission Beach is a small strip of land with water on both sides: to the West is the Pacific Ocean, and to the East is Mission Bay. The majority of the strip are houses (many are vacation rentals) and small shops renting surfboards and bikes.

Because of the easy access to restrooms, the amusement park, and restaurants, South Mission is a more family-friend part of Mission and Pacific Beaches. At the end of Mission Bay is Belmont Park, a small amusement park with free admission. In the same parking lot is The Wavehouse, which is a complex that includes a restaurant and bar, athletic club, and fake wave for surfers to practice their skills. South Mission is also home to a grassy park area with many barbecue pits. It is a great place to spend the afternoon with a group of friends! If you forget anything, hop into one of the small convenience stores to pick up supplies. 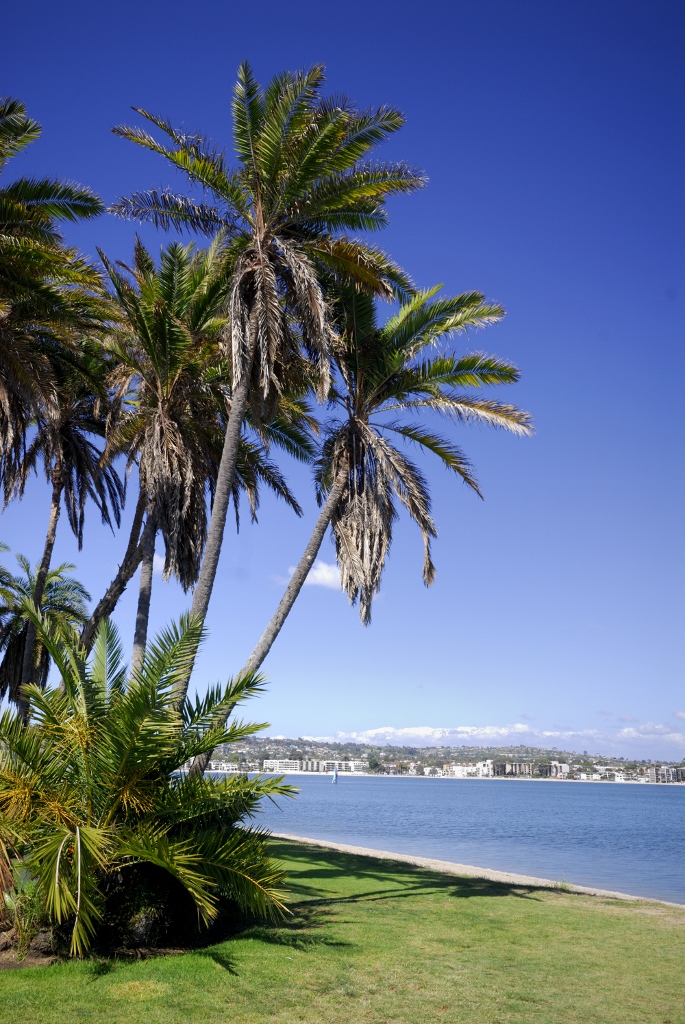 A smalls strip of land separates Mission Beach from Mission Bay, but the vibe of the two bodies of water could not be more different. While Mission Beach is the party destination, Mission Bay is a haven for those who love sports and outdoor activities. Mission Bay has several docks with sailboats, and students can even take sailboat lessons on the calm waters of the Bay. In addition, there are rental companies offering paddle boards, kayaks, and canoes.

Those interested in fun on land can take advantage of the Bay’s tennis and basketball courts or baseball field, which are located on a small peninsula. Jump in the water and cool off if you get too hot while playing sports! The Bay is also surrounded by a boardwalk that is perfect for jogging, walking, skating, or roller-blading.

Coronado was recently voted the Best Beach in the U.S., and at CISL, we agree! There are so many reasons that this beach deserves the title: its beautiful, long beach has soft, white sand, the waters are usually calm, and the famous Hotel Del Coronado is a unique backdrop for such gorgeous scenery.

Because Coronado is such a large beach, many go there for privacy and peace and quiet. The west end of the beach is equipped with places for hot coals, so many choose this area to barbecue throughout the day. At the end of the western side of the beach is an area for San Diego’s four-legged friends: dogs are allowed to run off the leash in this area. 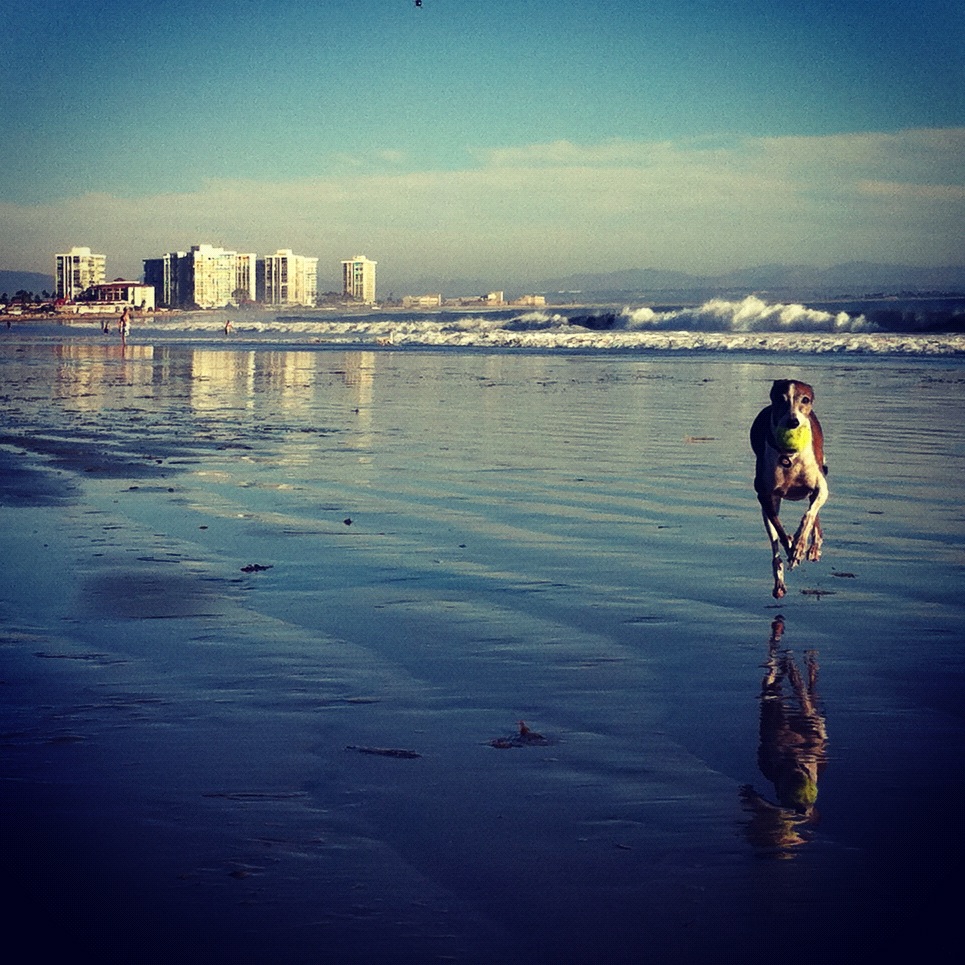 Unlike Pacific Beach, which has many stores, the west part of Coronado beach has none: instead, it is lined with houses. The east end of the beach, which is closer to the Hotel del Coronado, has access to Coronado’s downtown. Ice cream shops, restaurants, and shops line Orange Street. The Hotel del Coronado (called the “Hotel Del” by locals) also has numerous shops, an ice cream parlor, a restaurant, and a bar with beautiful views of the ocean.

Coronado is a beach for everyone. Are you looking for an upscale experience with expensive boutiques and fancy restaurants? Hang out closer to downtown Coronado and the Hotel Del. Those looking for a full day on the beach (complete with tents, barbecue equipment, etc.) have plenty of room for their gear on the beach’s east side. Dog lovers can enjoy some beach time with their furry friends, and those seeking peace and quiet can venture off between the sand dunes for some relaxing time in nature. The one group you don’t see in Coronado? Surfers. On occasion, the waves are high enough to make this beach a great location, but in general, surfers are found on the other side of the Point Loma peninsula, in Ocean Beach. 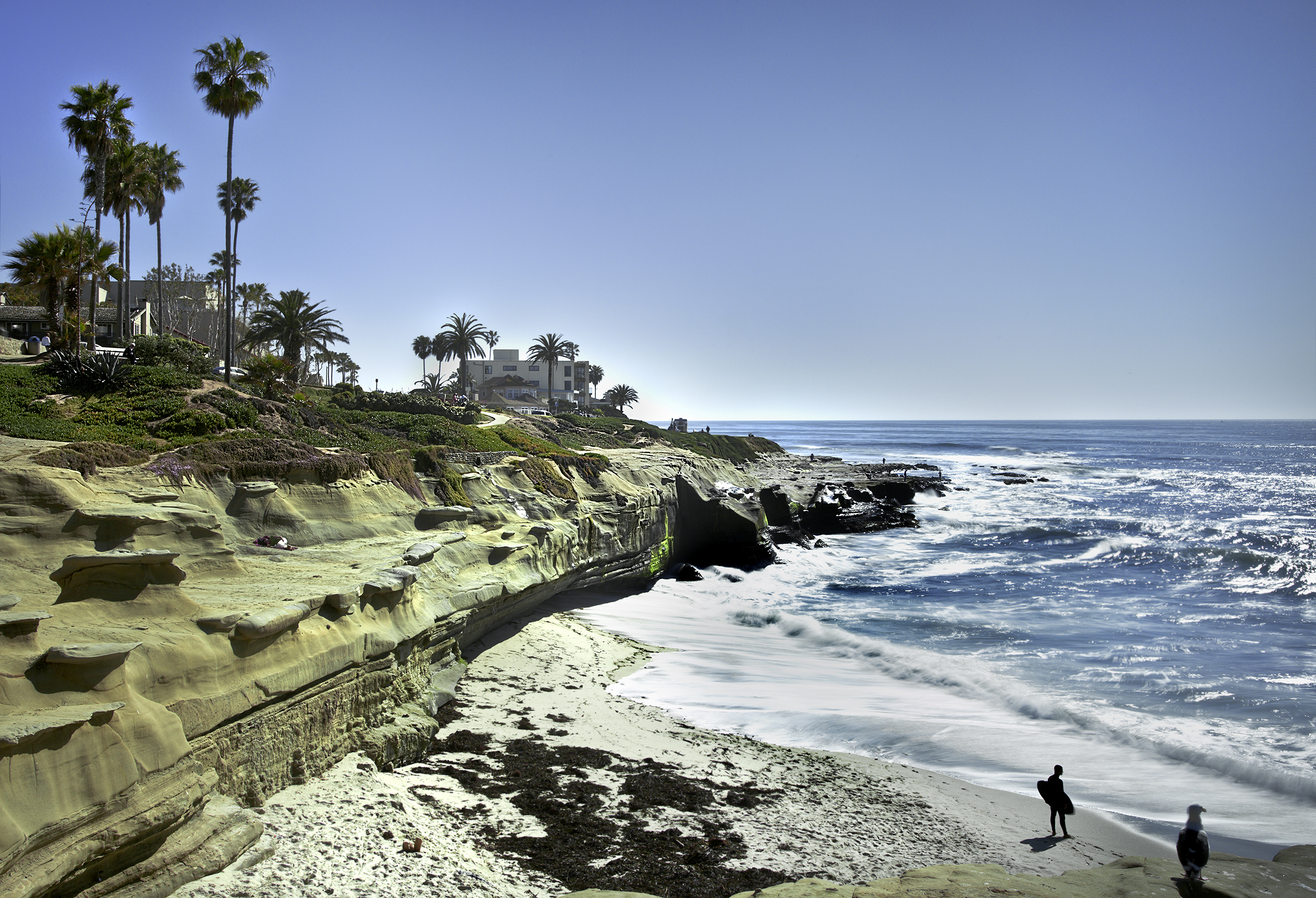 Great waves for surfing, a calm cove for kayaking, hundreds of seals for animal lovers, upscale restaurants for the culinary connoisseur, and an aquatic center for biology geeks . . . La Jolla might have something for everyone! This beautiful beach, located north of Pacific Beach, is one of the most popular beaches in San Diego: photos of the beach and its stunning cliffs are some of the most recognizable to tourists.

La Jolla Cove is known for its calm waters, which are perfect for kayaking, canoeing, or snorkeling. Several tour companies offer guided tours of the caves that are carved into La Jolla’s cliffs. Access to these caves is only possible by water. 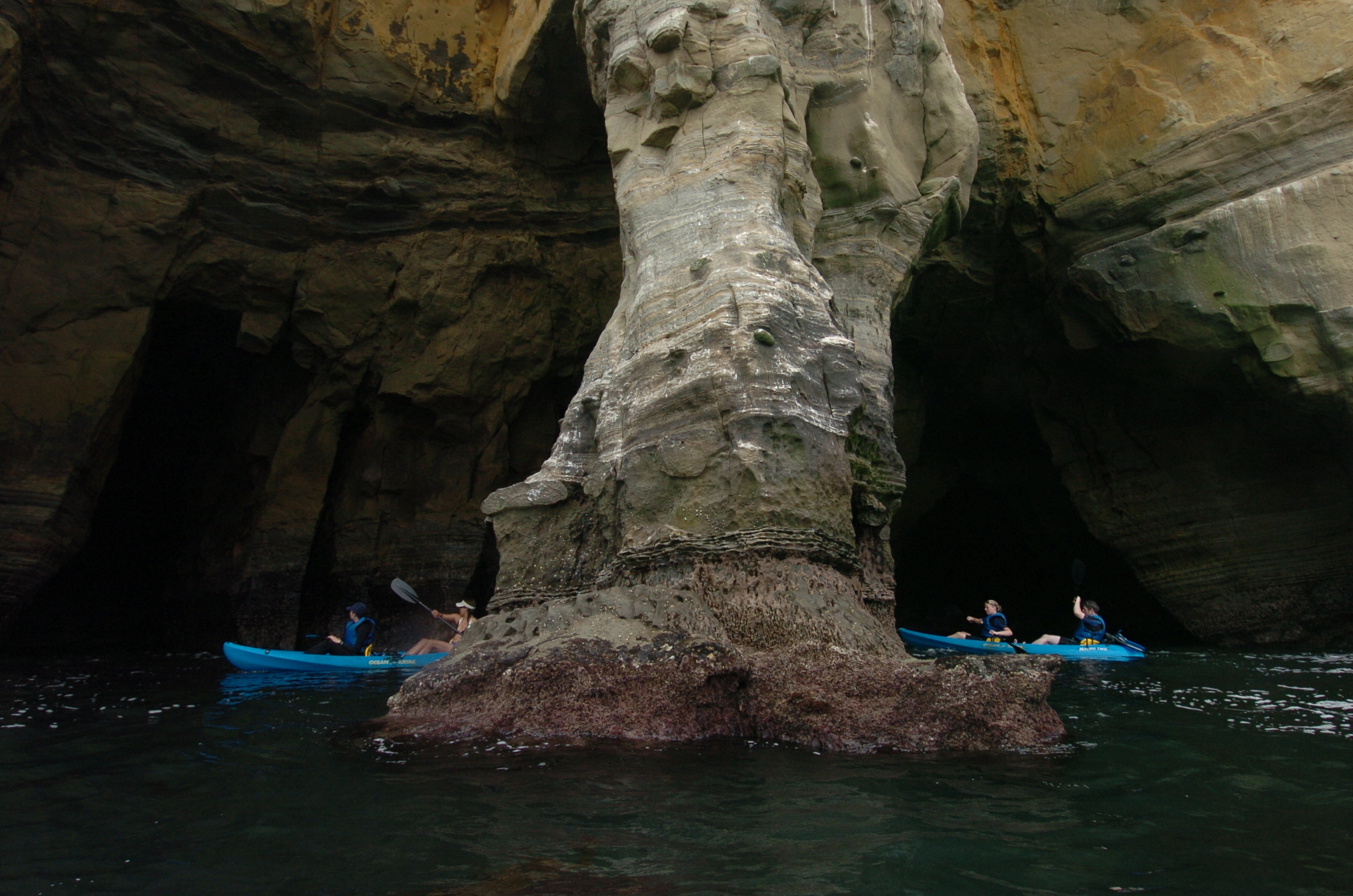 The clear waters offer views of marine life, including leopard sharks (which mate from May through November each year), sea kelp extending from the ocean floors, schools of fish, rays, and an occasional bright orange Garamundi (seen below). 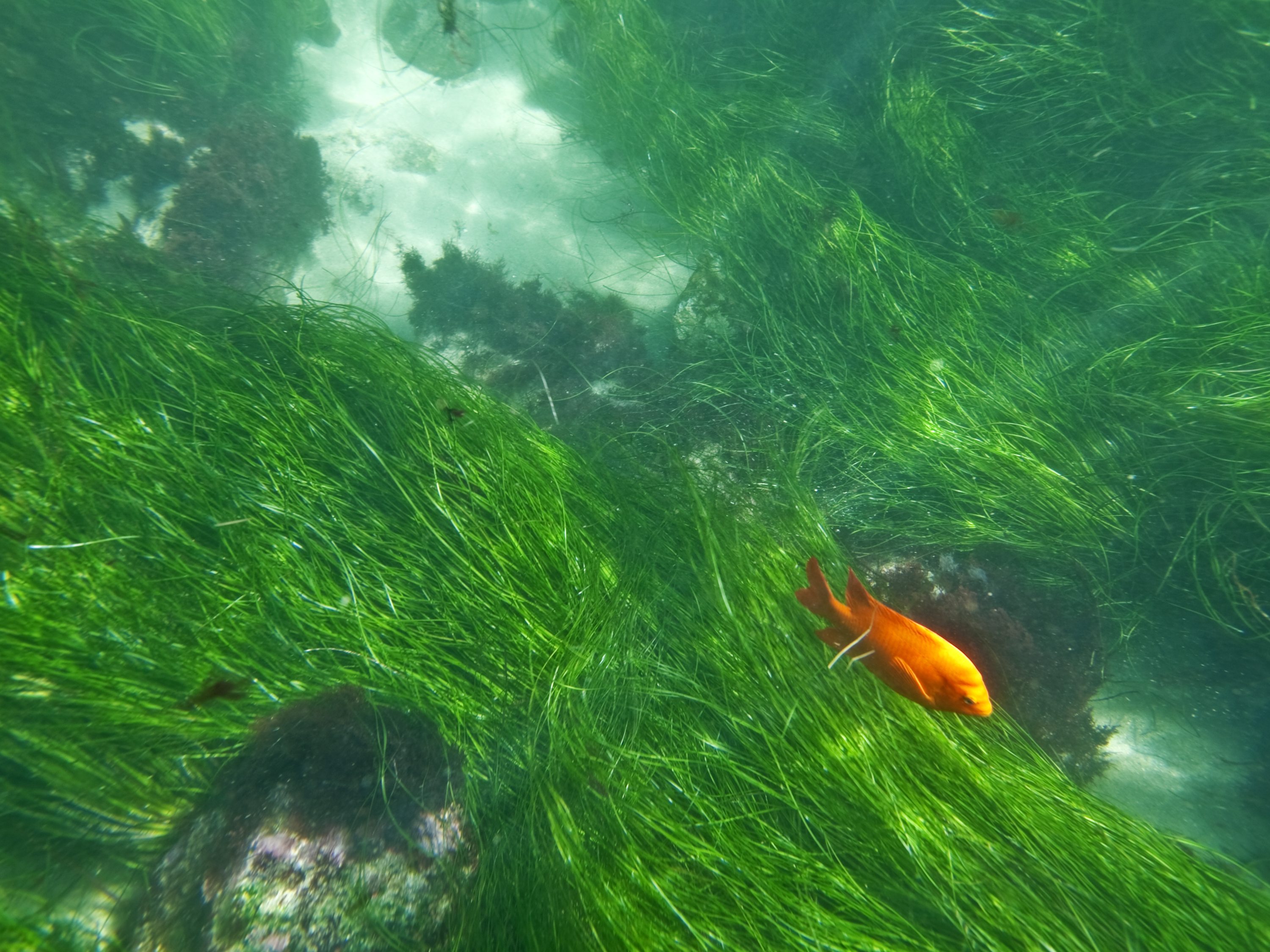 Those who are more interested in staying on land can enjoy the tide pools, just north of the pier, and see starfish, crabs, and other marine plants and animals. Or, visitors can venture over to the children’s pool, which is now home to dozens of seals and their pups.


At night, visitors to La Jolla can roast marshmallows over one of its fire pits. The beach is one of just a few that still allows fires on the beaches. With this beach, there truly is something for everyone.

Locals will joke that the one word which comes to mind when you say “Ocean Beach” is “hippy.” Ocean Beach (called “OB”) certainly does attract the Rastafarian-loving crowd, but there is so much more to this beach than just the smell of patchouli oil and games of hacky sack!

Ocean Beach is located north of Point Loma and south of Mission and Pacific Beaches. (In fact, from the most southern point of Mission Beach, you can see Ocean Beach.) The area’s strong waves are a strong attraction for local surfers, and its long pier creates picturesque sunset photos.

Although the sandy area of Ocean Beach is much smaller than some of San Diego’s other beaches, there is also a large grassy area for locals to play. It is not uncommon to see many performers in this area tightrope walking, juggling, or performing other acrobatics. Another common sight in OB is groups of bright green parrots (called the “OB Air Force” by locals). The birds are the most active at sunrise and sunset.

OB’s downtown area is right next to the water, which makes it convenient to shop or grab a bite to eat. The community hosts several memorable street fairs throughout the year, including the OB Street Fair and Oktoberfest, but it is perhaps most famous for its weekly farmer’s market, which is held along Newport Avenue every Wednesday afternoon and evening.

Located south of Coronado, Imperial Beach recently underwent a massive renovation. The result is a new grass area, restaurants, hotels, statues, and picnic areas. Stretching out over the Pacific Ocean is a long wooden pier (usually lined with fishermen hoping for a catch) and at the end, a restaurant called Tin Fish, which has some of the best fish tacos in San Diego.

IB’s long, beautiful beach extends on either side of its charming pier, and surfers take advantage of its often powerful waves. In addition to the surfing crowd, IB attracts a very different type of surfing: four-legged ones! Each year, IB hosts a dog surfing contest. The community also hosts San Diego’s only beach-front farmer’s market each Friday afternoon during the warm weather months.

With all the new construction, Imperial Beach has become a wonderful mix of locals and tourists of all ages: from families enjoying a day on the beach to surfers catching a wave to fisherman catching fish, you will be able to find something to suit your needs!

Del Mar is famous as being the home of San Diego’s fairgrounds, but locals will tell you that there is plenty to do at this beach not just during fair season, but throughout the year. In addition to its beautiful beach and backdrop of massive cliffs, Del Mar is also home to Torrey Pines State Beach, with hiking trails leading up to impressive views of the Pacific. Golf lovers will recognize Del Mar as also being home to one of the most difficult golf courses in the world.

The community of Del Mar is very small (it has a population of just over 4,000) and known as a very affluent area of San Diego. As with La Jolla and Coronado, many celebrities make their homes in Del Mar. Some of San Diego’s best restaurants (with incredible views of the ocean) and most upscale shopping are found in its charming downtown.

Regardless of the beach you go to, remember a few things: always wear sunscreen (sunburns are painful!), drink lots of water (dehydration is never fun!), listen to the lifeguards (they are there to protect you!) and never smoke or drink on the beaches. Police officers will ticket for these offenses, and a fine will ruin a beautiful day at the beach!

Need some more tips? Check out this post for more information on SD’s best beaches.